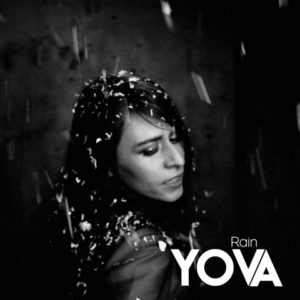 A new year release from a new project Rob had a hand in, arranging, performing and co-writing, is out this month. Yova is a band project from old friend of Rob’s Mark Vernon and singer Jova Radevska. This track is part of a sequence to be released over the forthcoming months, and the project as a whole will be culminating in an album (more on that later). This track also features another old friend of Rob’s former PJ Harvey bassist Ian Olliver and Peter Gabriel’s guitarist David Rhodes. For more details please see press release below and to download and stream https://backl.ink/rain

London based via Northern Macedonia, analogue duo YOVA (Jova Radevska & Mark Vernon) have announced that they will release a new single on the 16th of January 2020.

‘Rain’, the follow up to their recent debut single ‘Moondog, was originally recorded by the YOVA line up of Jova Radevska (vocal & lyrics) and Mark Vernon (music) together with Rob Ellis (drums, organ, backing vocals & keyboards), Ian Olliver (bass) and David Rhodes (guitars). Available digitally at all the usual major outlets, ‘Rain’ was co – produced with Martin McDougall and then mixed by Grammy nominated Cameron Craig (Bjork, UNKLE, Annie Lennox and Joe Strummer). The initial single will be followed by a special mix from Erasure’s Vince Clarke that will be available from the 28th of February, both tracks will then be released as part of a four track digital bundle on the 6th of March 2020.