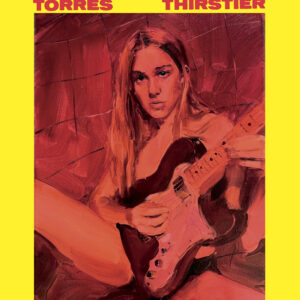 Recorded during lockdown in November 2020 and consequently involving some fairly complex trans-Atlantic logistics, the new album by Mackenzie Scott aka Torres is finally released today! “Thirstier” is the 3rd album Rob has produced with Torres, “Sprinter” and “Three Futures” being the previous occasions, and similar to those records, a similar cohort of worthy contributors added some great work to the production…the album was co-produced by Peter Miles at Middle Farm Studios where the album was recorded. Other contributors to this album were Adrian Utley (Portishead) and Ben Christophers (Bat for Lashes)  along with Will Harvey on violin, and  and the album was mixed by TJ Allen and mastered by Heba Kadry. Rob played drums, backing vocals and other instruments throughout. The album has been very well received by the press…

“Scott’s ability to weave between monster guitar eruptions, refined pop and stripped-back moments that allow her voice to soar is a constant” 8/10 UNCUT

“Thirstier comes on like a bold, heady catharsis” – 4/5 MOJO

“…it’s also hard to fault this restless album, which is punchy and gutsy enough to hold up Torres’ constantly intriguing ideas” – 4/5 NME

“With ‘Thirstier’, Torres has delivered her most varied set of songs yet; trying on so many different costumes suits her”- 8/10 DIY

“Some of her most nuanced, delightfully disparate songs to date” –  4/5  SLANT

“…a rejoinder to the long-enduring myth that great songwriting only emerges from depression and torment” – 7.8/10  PITCHFORK

:…career-best anthems with the pace and drama of a heist recruitment montage!” – 8/10 CLASH

“…the most commanding album she’s ever released” – BROOKLYN VEGAN

“Monster hook after monster hook, with dense layers of crashing drums and whirring synths and bells-and-whistles that push each song to the next level” – STEREOGUM

“It is the most hungry and explosive Scott has ever sounded, blowing her style into a magical fantasia of instrumental bombast and delirious joy” – 8.5/10 UNDER THE RADAR

END_OF_DOCUMENT_TOKEN_TO_BE_REPLACED

NEW SOLO ALBUM FROM ROB! April 2020 sees Rob release his first solo album for 16 years! Recorded last year at his home and at Middle Farm Studios in Devon, the album features twenty, mainly instrumental tracks, commissioned by KPM as a production music album for the label…Rob adapted the tracks from various compositions he’d […]