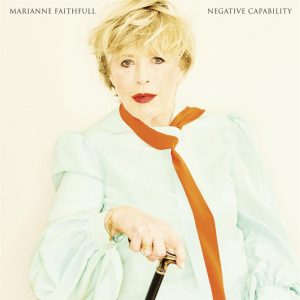 The much anticipated new album by Marianne Faithfull “Negative Capability” was released today (Nov 2nd) to huge acclaim. Co-produced by Rob with Warren Ellis & Head, this album also features contributions from Nick Cave, Mark Lanegan and Ed Harcourt. The album was recorded at La Frette studios on the outskirts of Paris over a two week period in January this year. Here is how some of the press have reacted…

5***** “Astonishing, its beauty lies in its frankness and in its wavering imperfection”  – METRO

9/10” There won’t be a better record released this month, and very few this year.” – CLASSIC ROCK

8.5/10 “Marianne Faithfull has delivered a searing late career masterstroke, as vital as any in her storied career” – THE 405

4**** “A staggering meditation on ageing and death” – THE GUARDIAN

“Faithfull and her producers…work a mournful magic” – THE WASHINGTON POST

“Visceral and compelling” – THE SUNDAY TIMES

“Moving and rather magnificent” – THE I

“No adieu this, surely, rather an au revoir from a wild child turned magnificent singer of torch songs” – THE SCOTSMAN