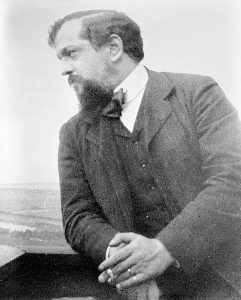 Personal post from Rob…”25th March 2018 marked the 100th anniversary of the death of the great composer Claude Debussy. I wanted to acknowledge it somehow as I think I can say, pretty unequivocally, that his is the music that has been most significant for me over anyone else’s in my life, and who I always return to as a listener and as a working musician wearing their influences on their sleeve, as we tend to do, without it ever losing its premier place in my estimation (yes, even more so than the other great love of mine and similar musical titan Phil Collins…). It goes without saying, that there has long been a general consensus that Debussy’s work really marked the start of what became the sound of our time, and whose influence on music is beyond reckoning…I am just one of the many countless musicians who, over the decades since his passing, have been very deeply affected by it.

I hope therefore, that you’ll indulge me…I thought I’d like to pay my respects here, in my own very small way to a composer whose music, in my own mind at least, has been so important for my work, since I first heard it (too late) in my early 20’s. Not that that is in any way obvious probably, from listening to anything I’ve done since…rock drummer influenced by a late 19th century “classical” composer…what?! Clearly I’ve failed dismally to pursue a career-path in music that lives up to how important he has been for me, having worked pretty consistently in “rock/pop” world, and which, at least on the surface, you would think bears little comparison to his work, and certainly I’ve never got remotely close to the high-bar technical requirements of performing such music, but maybe with me it can occasionally be discerned in my clumsy attempts to impose a fluid, ambiguous drum rhythm here, or a piano halo there on work for any of the artists who’ve had the dubious honour of putting up with me over the years (many of whom didn’t actually need my help to bring such affectations, being similarly obsessed with him themselves). But above all it’s his sense of atmosphere, his sensual air of mystery and his anti-rulebook “if it sounds good, fuck the theory” (I’m paraphrasing!) approach to music that has always attracted me the most.

In my own solo work I’ve been more free to be quite brazenly obvious about my obsession with him. In one such extreme instance I even went so far as make an entire 4 movement composition using the first bar of every piano work he ever published and then stuck it on one of my own albums by way of paying homage to his work, or trying to “possess” it somehow, and get inside it, and as such his work has always remained something of a first point of reference for me, and which increasingly, as the years have passed, have made me think more and more how mysterious and unfathomable it is, and consequently how much more unmysterious and fathomable my own paltry attempts are in comparison…!

I could go on and on here thinking and writing about him and his work (as any of my long-suffering friends & family would tell you!), but I won’t indulge myself or bore anyone any more than I probably already have, instead I’d just like to present my own little tribute to him by way of a recording of an arrangement I made some years ago of one of his last works, the last but one solo piano piece he ever wrote, and which happens, appropriately, to be called “Élégie”…( I even wrote another piano piece called L.A.G as a play on that title, another example of my OCD where Debussy is concerned!).

By way of explanation…the original Debussy Élégie was written in 1915, the same year in which he composed his Sonata for Cello & Piano, and I was really struck by how much the main melodic thread of it was consistently in the low register, and how very brief a composition it was…and I came to my own fantasist conjecture, that maybe it was written as a study for the sonata. In feeling and character it is entirely different to it, but possibly, I thought, that’s why it remained as a separate piano draft…again, all my own obsessive theorising, and in no way based on any given facts, but I thought I’d self-indulgently follow the thought through and see how it would sound if I arranged it as such, and to my pleasant surprise the experiment seemed to work quite well…

So, as yet another mark of my deep love and respect for his music (and again humbly hoping that I haven’t caused it/him any disrespect as a consequence), here is a recording of my arrangement of the Élégie performed by Nicole Robson on cello and Brendan Ashe on piano that I forced them to do in a 5 minute break on a session we were on together a while back, and which they were kind enough to indulge me… This is their first and only run through of it, and, considering its lack of rehearsal, it’s a testament to both of them what great musicians they are as I think they played it very beautifully and appropriately elegiacally…I hope you’ll enjoy listening to it, even if as just a little curio… and my very deepest respect and heartfelt gratitude to Monsieur Debussy”